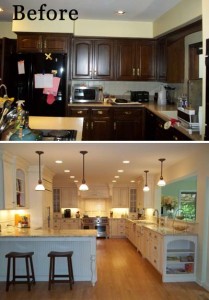 With growing families, many homeowners reach the dilemma of either adding on to their current home or moving.  In this case, the homeowners worked with Normandy Designer Tony Tondelli and realized their current home had the potential to not only meet their needs, but would be more cost effective than buying a new home.

The homeowners had a list of needs, everything from an expanded kitchen to a hobby room for sewing and crafts.  They also decided their formal dining area was not being used frequently enough, and that the space would better serve their lifestyle if re-purposed.  Tony was able to reconfigure the layout to make the most effective use of the space, and the final result was much more functional and attractive. The key layout changes included giving the laundry room its own space adjacent to the remodeled powder room; removing the wall between the sunroom and kitchen, and the sunroom became the new dining area, which allowed for a larger kitchen layout; a second story addition was added to house the hobby room, with the rooflines mimicking the lower rooflines.

Industry peers were impressed with Tony’s creativity with new layout, and found it to be more effective and efficient than the former layout. The home addition project received a Remodeling Excellence Award from the National Association of the Remodeling Industry, Chicagoland.