People all over face the debate of whether to do a home addition or move to a new home.  Many are finding that the homes they’re looking at still need updating to meet their needs. “Adding onto a current home enables homeowners to have something that meets their tastes and styles, and functions how they need it to on a daily basis,” says Normandy Designer Tony Tondelli, “Take my own family for example; my kids didn’t want to move to another school district and we couldn’t find any homes on the current market in our district that fit all our needs and wants. It led to us deciding to add on to achieve our ideal home.”

There’s a few different ways a homeowner could add onto their home, and some homes fit certain additions better than others based on style, zoning restrictions, etc. The three most common ways are to add either up with an extra level, extending over the garage, or expand out into the yard. 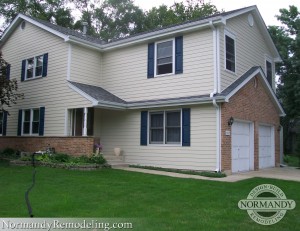 In this example, the homeowners had a new baby and needed a four bedroom home, so they began the debate of whether to sell or add on. It was decided that not only was it more economical for them to add on, but the fact that they wouldn’t have to uproot their kids from school and deal with the general hassle of moving was very appealing. “In this case, we couldn’t expand the home out into the yard because of zoning restrictions. The home originally featured three bedrooms, and adding on over the garage provided ample room for not only an additional bedroom,” commented Tony, “But also a laundry room on the second floor for added convenience that better fit their lifestyle.” The homeowners were very happy with their decision and that they didn’t have to move to attain a home that fit their needs and lifestyle. Industry peers applaud Tony’s ability to create a seamless addition that looks like it was always part of the home from the inside out, and this project received a Remodeling Excellence Award from the National Association of the Remodeling Industry.

If you’d like to discuss the possibility of a home renovation to help you decide whether to do a home addition or move with Tony, schedule a complimentary, in-home consultation with him today!