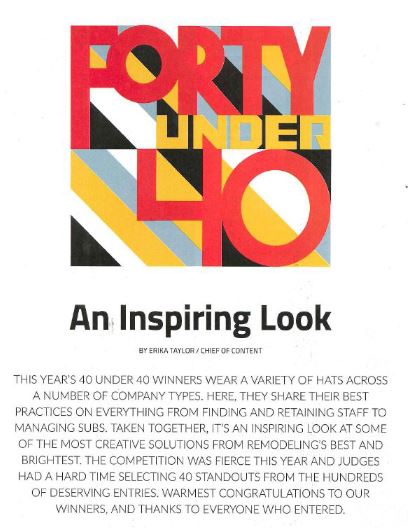 Normandy Designer Leslie Lawrence Molloy, CKD has been named to Professional Remodeler Magazine’s annual Top ‘40 under 40’ list.  This esteemed award recognizes the nation’s next generation of innovators taking the remodeling industry by storm.

“It is an honor to be included in this year’s ’40 under 40’ class,” said Leslie. “I’m flattered to be amongst such a talented group of professionals from across the country.”

Leslie is a Certified Kitchen Designer (CKD) from the National Kitchen and Bath Association (NKBA) with over 15 years of design experience. Her impeccable taste and cutting-edge designs have earned her recognition from other industry leaders, including Qualified Remodeler Magazine and The National Association of the Remodeling Industry (NARI) of Greater Chicagoland. She is also the fourth Normandy Designer to receive the Top ‘40 under 40’ Award.

“Leslie is a talented designer and is a crucial member of the Normandy Design team,” said Normandy Remodeling President Andy Wells. “It has been a pleasure to see her hone her skills over the years.  This award is a testament to the dedication and hard work that she puts in day-in and day-out for her clients.”

You can learn more about Leslie and set up an in-home design consultation for your next remodeling project here.