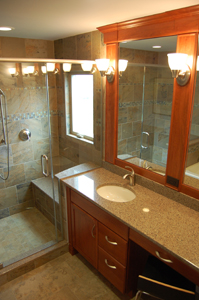 Award Winning His & Hers Bathroom Remodel

The His & Hers Bathroom concept is a fairly common one that can be found in Master Bathrooms throughout the country.  Typically this means that there are two sinks, and maybe even two medicine cabinets, one for each person.  This Frankfort bathroom by Normandy’s Ann Stockard takes that concept one step further, right into the shower.  When Ann and the homeowners first met, they discussed what they liked and didn’t like about their current space.  After a thorough assessment, they soon agreed that their bathroom would really benefit from a reallocation of some space. 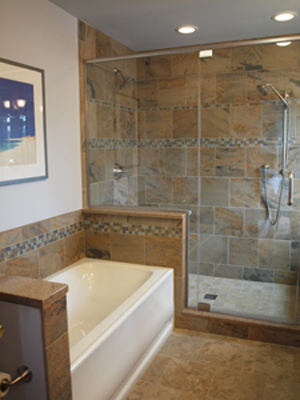 By shifting the layout of the space, these homeowners were able to significantly increase the size of their shower, which they use much more than the tub.  The shower now has an integrated bench, a standard shower head, as well as a secondary hand held shower.  The countertop for the double sink vanity was extended into the shower enclosure to provide a shelf inside the shower for “her” toiletries.  The side wall for the bathtub extended a countertop on the opposing side for “his” toiletries.

This project was honored by the National Association of the Remodeling Industry (NARI) Greater Chicago with a First Place 2010 Remodeling Excellence Award.