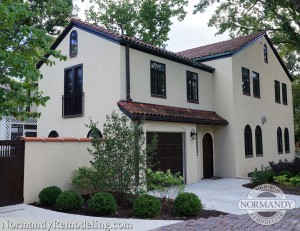 In a home that already has a distinct style, it’s best to work with that style instead of making updates that look like they don’t belong.  “This Spanish style home in Winnetka was a beautiful foundation but, as with all things, needed some restoring after time had taken a toll,” says Normandy Designer Vince Weber.  “I loved that the homeowners were adamant about staying true to the home’s style, because it made the project so unique and interesting.”  It’s best to become as familiar with the style as possible, so you can make appropriate updates that complement the existing features and meet your needs.  “For this home renovation, the homeowners wanted the original, wearing stucco replaced with a yellow stucco,” says Vince, “From a design standpoint, it was a perfect idea to complement the home’s unique style.” 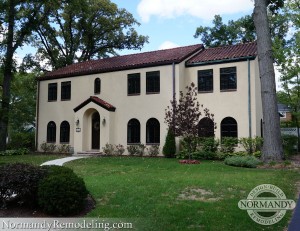 “Once the exterior was wrapping up, we moved to the kitchen, which needed a complete update,” commented Vince.  “The homeowners wanted an open layout, which is a huge kitchen trend right now.”  A light, fresh scheme was created for the kitchen, including a stucco hood to complement not only the home’s history, but also tie in the stucco exterior of the house.  “After finishing the kitchen, powder room and other miscellaneous updates, we focused on the second floor to update the master bedroom and bath,” says Vince. “The whole house now functions to meet the homeowners’ daily needs, but still boasts the rich heritage of the home, which was the overall goal.”

Industry peers admire Vince’s ability to restore this Spanish home with a functional layout that incorporates beautiful colors and materials reflective of its roots.  The home received a Remodeling Excellence Award from the National Association of the Remodeling Industry, Chicagoland.